From rich archaeological sites to lush green forests, secluded beaches and lovely hiking paths, The Turkish Riviera, where you will encounter history, nature and endless blue at every turn, has thousands of unforgettable activities and experiences to offer.  Follow the traces of ancient civilizations and feel like a Lycian, you will see sights that will stay with you forever in this part of the Turkish Riviera.

On the Trail of History: The Lycian Way

The Lycian Way is far beyond a walking path…The Lycian Way, which combines the endless blue of the Mediterranean with its lush forests, astonishes visitors with its magnificent landscapes, pearly coves, and ancient cities. It functions as a link between the past and the present. The Lycian civilization, which ruled this region in ancient times, is commemorated on this road that runs from Fethiye to Antalya. 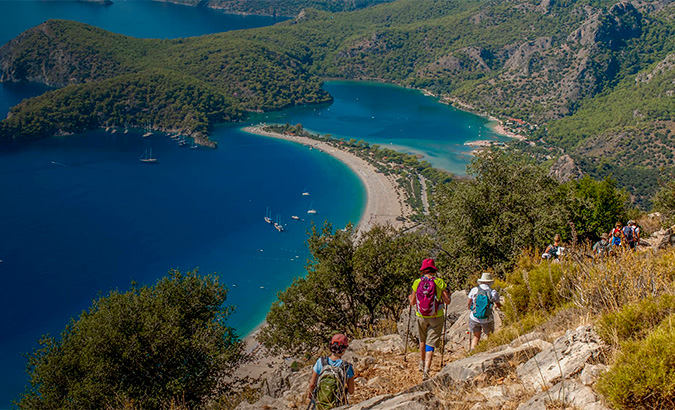 While the signs along the way help to find the way easily, countless accommodation options ranging from hostels to bungalows beside camping zones and the taste of Turkish coffee accompanied with friendly chit-chats of locals in the villages along the way will make you feel at home.  The Lycian Way, stretching 535 kilometres, is generally preferred in spring and autumn. You can camp right in the middle of nature and enjoy the crystal-clear waters of the Mediterranean on the roadside beaches. In addition, the Gelidonya Lighthouse, located on Taşlık Burnu in the Kumluca district, is a must-see along this route. This spot, which was chosen as the best view of 2007, will take your breath away almost immediately.

Located between Adrasan and Olympos, Genoese Bay is one of the prime nesting habitats of loggerhead sea turtles (caretta caretta) and the  Mediterranean monk seal. Genoese Bay, where green landscape perfectly blends with sandy beach and turquoise sea, is an unmissable spot of the Blue Cruises along the Turkish Riviera. Göynük Canyon, which is a true wonder of nature, is an ideal place for nature lovers, adventure seekers and those looking for tranquillity. Located inside the Beydağları Coastal National Park, Göynük Canyon offers hiking and trekking trails, recreational areas and breath-taking views of waterfalls and ponds.

The Unquenchable Fire of the Mediterranean

An unquenchable fire that has spawned legends throughout history...The Chimera of Çıralı, located in Antalya Çıralı, is almost a natural mystery.  The source of Olympos' unquenchable mystical fire is actually methane gases rising from the ground. This is the Chimera, according to Homer's legends, where Heracles, the son of Zeus, lit the Olympic torch. You can have a unique experience by roasting your food on the fires coming out of Yanartaş (Chimera), a mystical wonder that can be seen in all seasons.

The ancient city of Olympos, which is thought to have been founded around the 2nd century BC, is Antalya's gateway to the past… You can sunbathe on the beaches that follow the traces of history in the ancient city, which is located in the forest and embraces the turquoise Mediterranean. In short; Olympos, one of the important cities of the Lycian civilization, promises an unforgettable holiday to the travellers. 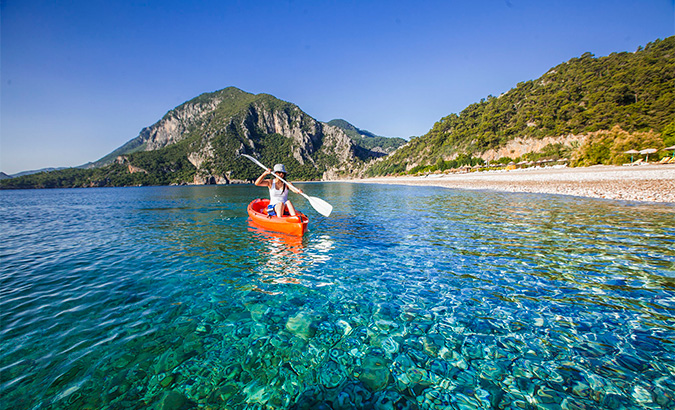 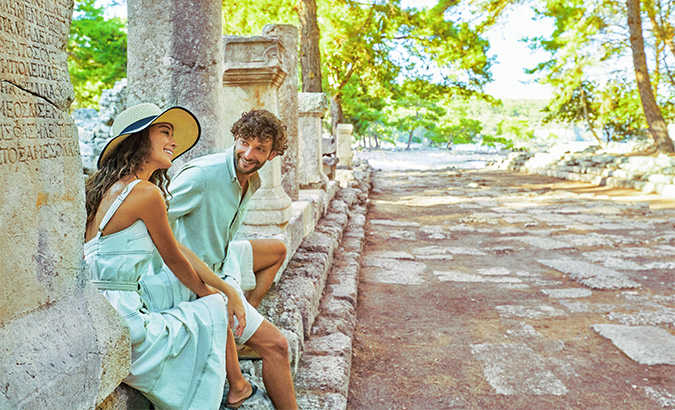 Those passing through Antalya should make a point of visiting Phaselis. It promises a wealth of discoveries with its ancient city, caves, and intact bays. The Ancient City of Phaselis, the most crucial port city of its time, invites you to lose yourself in its dazzling beauty.  In the ancient city of Phaselis, which is also a point where history joins hands with nature, you can be a part of this embrace by jumping into the cool waters. After all, swimming in the heart of an ancient city is a once-in-a-lifetime experience in the Turkish Riviera.

With its peak reaching up to 2366 meters, Tahtalı Mountain, included in the Beydağları National Park, is the highest point of the region and one of the must-see sightseeing stops in Kemer.  Unique views await you after ascending the mountain via the Cable Car, which is the second longest in the world and the longest in Europe. You can watch the sunrise and sunset or simply enjoy the fresh air. While Tahtalı Mountain offers restaurant, bistro, meeting hall facilities to relax, paragliding will give you the opportunity to glide from the green to the blue of the Mediterranean accompanied by the spectacular views.

Kemer, one of the charming towns of Antalya's coastline, offers magnificent moments to its visitors with its world-known blue flag beaches, water and amusement parks, luxury hotels, top-notch restaurants, ancient cities and vibrant nightlife. Kemer has nearly 300 days of sunshine per year, and swimming is possible for eight months of the year.