Starting from Antalya on the East and stretching over to Muğla on the West, the Turkish Riviera is Türkiye’s one of the most popular holiday regions located by the turquoise Mediterranean Sea. This lush coastal region offers you ancient cities, castles, ports, temples and much more to discover, welcoming you with its bright sun and dreamy blue sea.

The Most Popular Holiday Resorts of the Mediterranean

Along the Mediterranean coast, there are three towns that stand out for their beauty. It is one of the most preferred areas, especially for summer holidays. It has a wide range of accommodation options such as luxury resorts, hotels, hostels, apartments and campsites along the entire coastline. 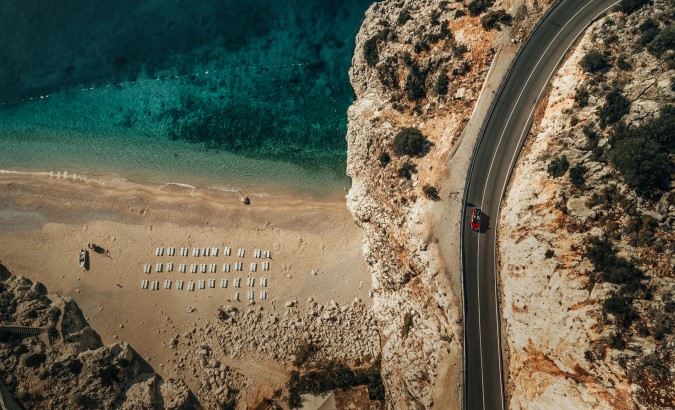 Kaputaş Beach, located near Kaş and Kalkan in the most westerly part of Antalya Province, has featured on many tourism posters over the years and is a firm favourite amongst locals and visitors alike. This isn’t a mass tourism region and there are no big resort hotels, rather just small friendly boutique hotels. The narrow beach is accessed via stairs down from the main road with tall cliffs rising to both sides of the V-shaped gorge. It’s very picturesque and well worth straying off-the-beaten-track for.

Kekova, which gives its name to the region, is the general name of the region that includes the 7.4-kilometer-long island, 500 meters from the shore, right across Simena, Teimiussa (Üçağız), Aperlai Pier (Sıçak İskelesi), Aquarium Bay (Akvaryum Koyu), and Gökkaya Bay (Gökkaya Koyu).

The northern shores of Kekova Island (Kekova Adası) overlooking Simena are full of traces of the civilization that was partially submerged in the earthquakes in ancient times, such as stone stairs, house ruins, pier ruins, and half in the water, half of which extend to the depths of 4-5 meters in the sea. Simena is located on the peninsula opposite Kekova Island. Between Kaleköy and Üçağız, one can observe the remains of the road and dock that were submerged towards the shore among the small islets that were used as stone quarries for sarcophagi.

Side is among the best-known ancient cities in Türkiye. Side is a major port city in the Ancient Pamphylia Region that attracts both domestic and international visitors. Side was the first settlement on the peninsula and was the centre of culture, science, and bishopric during the Roman period, with a history dating back to the 7th century BC. 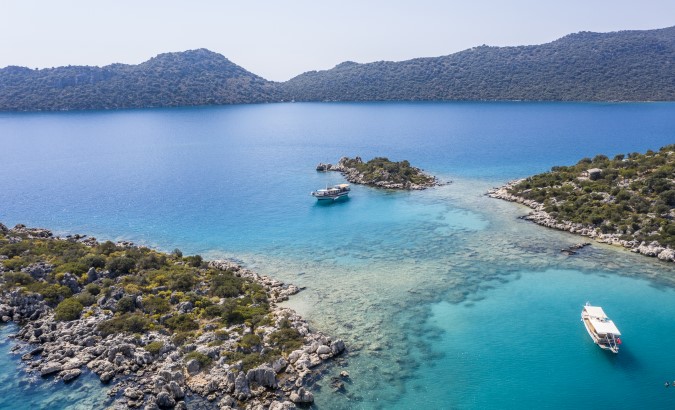 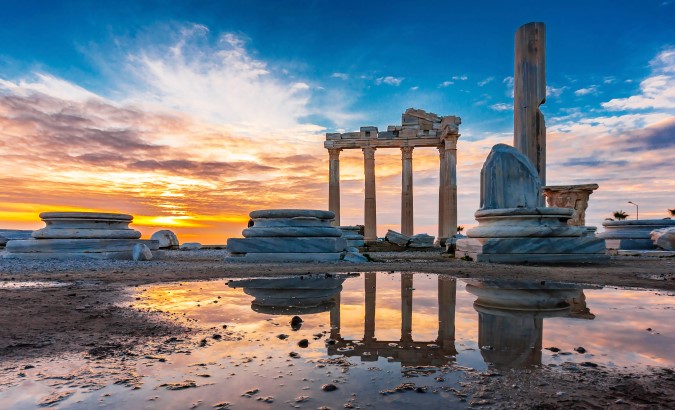 Side was a port in ancient times and its name actually means pomegranate. There are various spots to see and experiences to have in Side, some of which include the temples of Apollo and Athena, ruins of Selge, as well as various ancient theaters to feel like travelling back in time. The theatre built on colonnaded arches is the largest in the area.

The most important port city of Pamphylia in ancient times, Side is located on a 350-400-meter-wide peninsula, located 80 kilometers east of Antalya, seven kilometers southwest of Manavgat. Side became a settlement in the seventh century BCE. In the sixth century BCE, the city was dominated by the entire Pamphylia and the Lydian Kingdom. Continued its existence under the rule of Alexander the Great for a while, however, the city changed hands between the Hellenistic Period kingdoms after the death of Alexander. The city was later ruled under the Kingdom of Pergamum, Rome and the Eastern Roman Empire.

On sunny days, you can swim at the sparkling blue-flag beaches, go on boat and yacht tours, and relax in crystal clear coves while enjoying the cool Mediterranean waters. Walking between the ancient ruins on the colonnaded street, antique theatre, shopping in the bazaar where historical houses are located, sipping a cold drink while watching the sunset at the Temple of Apollo, the symbol of Side, will accompany your best memories.

Alanya, on the other hand, is very generous with the various opportunities it offers. You can join yacht tours in this region, which is literally the cradle of civilizations, and be one with nature by participating in diving tours. Alanya Castle and Red Tower are places that must be visited. You should not pass without seeing Damlataş Cave and Dim Cave. At the same time, the vibrant nightlife brings this place to the fore. Don't miss out on tasting seafood and having a village breakfast in all these holiday resorts.

The Flamboyant Golf Paradise Belek is one of the most preferred destinations in Antalya. The region, which is known for its secluded resorts, offers nature, sports, and vacations, as well as a plethora of shopping options. With its lively nature, rich flora, zoological variety and friendly climate, Belek is one of the world’s leading golf destinations. 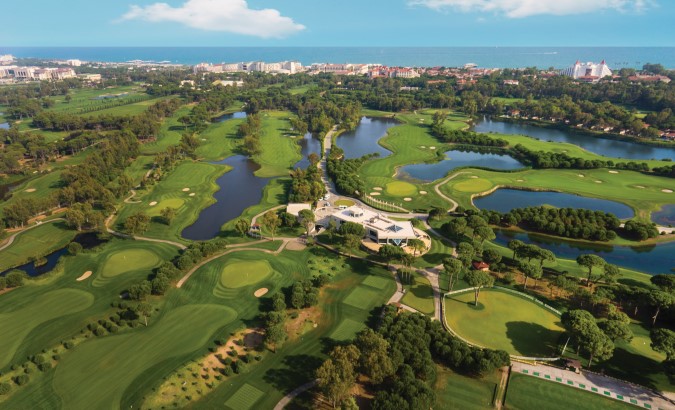 Belek has more to offer than you expected with its resorts providing sport activities such as football, tennis, or golf 12 months a year. After a day of golfing in one of the golf courses awarded as “Best Gold Resort in Europe”, where the green of its forests meets the enchanting blue of the Mediterranean, you can relax on the silky sand beaches and relief from stress with spa facilities in comfortable, fully-equipped and luxury hotels by the sea... The meeting point of history, nature and the unique colours of the Mediterranean, Belek is a one-of-a-kind dream of vacation in the minds and hearts of millions of people. Set the scene in the Turkish Riviera and do not miss your story.

Kemer is one of Antalya’s most popular holiday villages. Kemer is home to many luxury resort hotels and the magnificent Tahtalı Mountain. Luxury all-inclusive hotels with outstanding beaches, boutique hotels nestled in romantic surroundings, boat tours in turquoise waters, and even deep blue adventures cover a wide-ranging appeal for couples.

Antalya’s Gates to the Past

Apart from the sea, sand and sun trio offered by the city, if you are expecting a holiday where you can trace the history and culture, Antalya has a lot to offer. Perge Ancient City is one of them. This ancient city, which was the capital of the ancient Pamphylia Region, will fascinate you with its eye-catching beauty as soon as you enter through its gate. It is among the most organized ancient cities of Anatolia. You can observe the majority of the artefacts unearthed during the excavations here at the Antalya Archeology Museum. One of the most impressive places of the ancient city, where you can see ruins such as baths, agora and theater, is undoubtedly the columned street that still preserves its texture.

The Aspendos Theatre, which impresses all visitors, is the most symbolic structure of the Aspendos Ancient City that has survived to the present day. Famed for its epic acoustics, the Aspendos Ancient Theatre is the best preserved monument of its type from the ancient world, and one of the most intact in the world.  Built by Emperor Marcus Aurelius, Aspendos Theater has a capacity of 20.000 people. Isn't it impressive? Make sure to attend the International Aspendos Opera and Ballet Festivals held in the two-thousands-year-old wondrous theatre and have a fairy-tale experience. 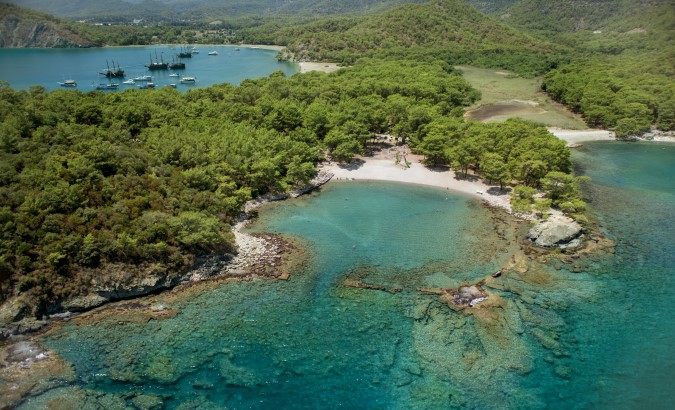