Set Sail to the Turkish Riviera!

Time to explore jaw-droppingly gorgeous Turkish bays in a unique way! The Turkish Riviera is famed for pristine beaches, the unforgettable turquoise of the sea, and the lush Mediterranean landscape.

From rich archaeological sites to lush green forests, secluded beaches, and lovely hiking paths, a Blue Cruise in the Turkish Mediterranean has something to offer everyone. You can spend a week in the region, and explore the very best of this earthly paradise, docking at destinations such as Demre, Kekova, Kayaköy, Ölüdeniz, and Dalyan. The region is ideally situated to combine your Blue Voyage with visits to historical sites and hikes to natural beauties and famous trails. 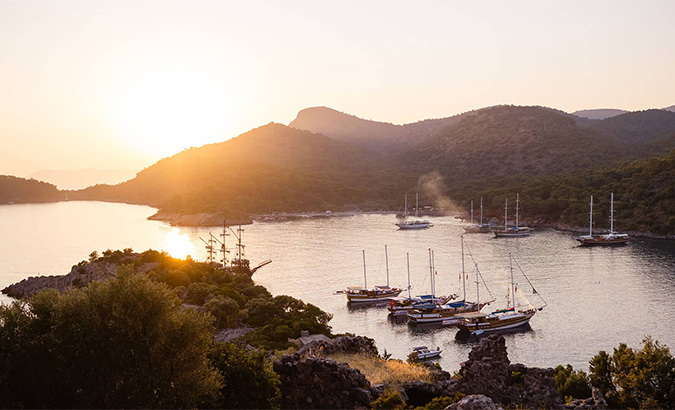 As one of the most blessed regions of the world when it comes to cultural heritage, Türkiye has many historical sites on its Aegean and Mediterranean coasts. A perfect visit to the region would be aboard a gulet, the traditional, elegant vessel with sails and a motor, blending with the landscapes of the Turkish coast. Built of teak and oak, gulets feature individual cabins, an outdoor eating area, and sunbeds.

Sailing in the region also allows you to discover secluded bays off the beaten track, dive into crystal-clear sea, enjoy endless sunshine, and see historical sites from a different point of view. Blue Voyages generally consist of tailor-made programs. Choose one of the scheduled itineraries or ask the agency or captain to create a new route for you in accordance with your time schedule.

You can start your journey around Demre. After visiting the ancient site of Myra and the Church of St. Nicholas - a.k.a. Santa Claus - get a quick bite in the village of Demre and weigh anchor in the afternoon. The Turkish Mediterranean coasts are dotted with impressive displays of natural wonders, turquoise waters, and plunging cliffs. Navigate towards Kekova Island, renowned for its amazing underwater riches - feel free to ask to take five for a quick dive anytime!

The 260-square kilometer-wide Kekova region is under protection and offers an amazing underwater experience. Simena Castle and the small village of Kaleköy, solely accessible by water, are the beach’s must-see sights. You may also book a scuba diving class to explore the sunken city ruins nearby.

Evenings on the boat are crowned with delicious dinner tables staging seafood and Mediterranean delicacies, using fresh, local products. After dinner you will have nothing distracting around you except for the stars and moon: you can read, chit chat, play some games, or discover the feeling of a swim in the middle of the night surrounded by sea sparkles! 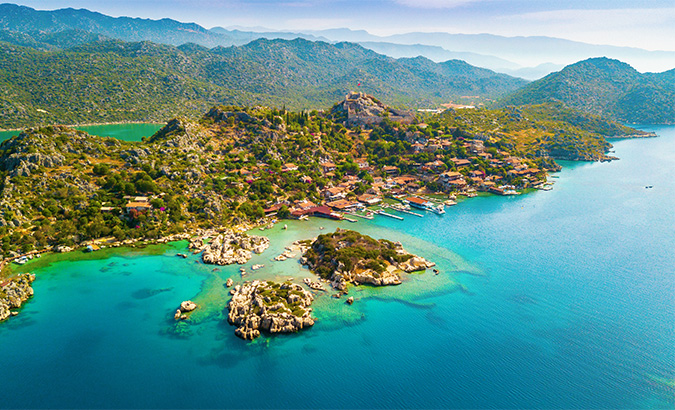 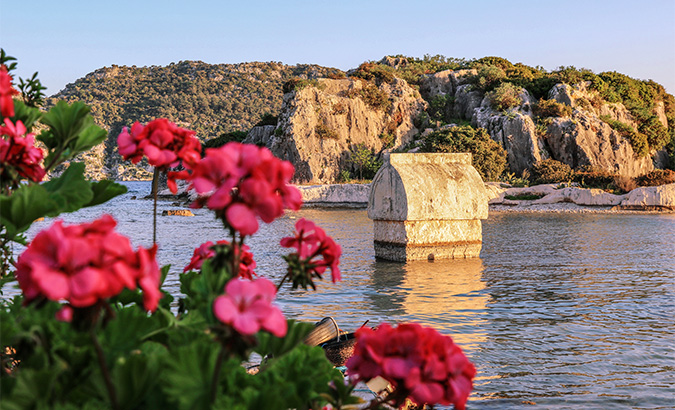 Navigating east, you can drop anchor on another beautiful spot near Gemiler Beach. Then, go ashore to visit Kayaköy, an abandoned village of stone houses, and head for a moderately easy hike with uneven terrain, steep inclines, and jagged rocks. The feeling of being in the heart of nature and the stunning landscapes are totally worth it! We recommend you return to your gulet around noon to find a secluded cove where you can enjoy a dip in the cool waters. Make sure to ask your guide about the Lycian Way, the 500-kilometer-long trail stretching from Fethiye to Antalya, a part of which you will be discovering.

In the morning, after a traditional rich and delicious Turkish breakfast, head to the sunken baths of Cleopatra. A 5-kilometer-long hike through forests, meadows, and coastal scenery takes you to the ancient site of Lydae, an ancient Lycian city with extensive Roman and Eastern Roman ruins, located on the modern Kapıdağ Peninsula. The rest of the day will be full of sunbathing and high spirits on the boat.

As days pass in idleness, visiting one cove after another, you will cruise towards Ekincik Bay to switch to a smaller boat in order to ride on the Dalyan River and observe diverse bird species like shy ibises or fearless gulls. The region is famous for its fertile lands, with lemon orchards and pomegranate trees surrounding you during your entire visit. The must-see site in Dalyan is the ancient Carian city of Kaunos, which dates back to the 4th century BCE. The archaeological site has a magistral theatre, habitation ruins, beautiful mosaics, and a Roman bath and domed Eastern Roman Basilica from the early Christian era. And since Kaunos bordered ancient Lycia it is also possible to see remarkable Lycian tombs carved into the cliffs. Once an important seaport, Kaunos is located inland today, because of İztuzu Beach which forms a natural barrier between the freshwater delta of the Dalyan River and the Mediterranean. This long, sandy beach with crystal-clear water is also one of the prime nesting habitats of loggerhead sea turtles (Caretta carettas), and a frequent destination for curious people who wish to have a good time by the sea and discover the hatchlings. At the end of a cool afternoon on the beach, take your binocs and choose yourself a good spot for watching little hatchlings hatching and running towards the sea.

Jump on board and indulge yourself in one of the cruises along the mighty Turkish Riviera. Feel the history and vibrance of ancient ruins that are dazzling, brilliant, and still stand tall. Surrender to the tender hands of the sea, which will ensure your well-being and relaxation. Remember, whatever your itinerary, there is always a sunbed onboard waiting for you! 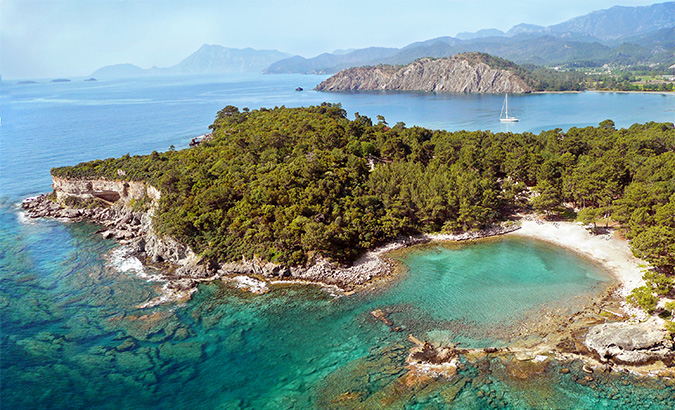